Factorising can be defined as a revised process of expanding brackets. This article is about how to factorising and its example in the math problem. 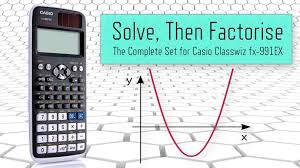 Factorising is the reverse process of expanding brackets. A factorised answer will always contain a set of brackets. To factorise an expression fully, take out the highest common factor (HCF) of all the terms.

Here is the way hoe to factorising.

This section shows you how to factorise and includes examples, sample questions, and videos.

Brackets should be expanded in the following ways:
For an expression of the form a(b + c), the expanded version is ab + ac, i.e., multiply the term outside the bracket by everything inside the bracket (e.g. 2x(x + 3) = 2x² + 6x [remember x × x is x²]).
For an expression of the form (a + b)(c + d), the expanded version is ac + ad + bc + bd, in other words, everything in the first bracket should be multiplied by everything in the second.

Factorising is the reverse of expanding brackets, so it is, for example, putting 2x² -2x – 1 into the form (3x + 1)(x – 1). This is an important way of solving quadratic equations.
The first step of factorizing an expression is to ‘take out’ any common factors which the terms have. So if you were asked to factorize x² + 2x, since x goes into both terms, you would write x(x + 2).

There is no simple method of factorizing a quadratic expression, but with a little practice, it becomes easier. One systematic method, however, is as follows:

Once you work out what is going on, this method makes factorizing any expression easy. It is worth studying these examples further if you do not understand what is happening. Unfortunately, the only other method of factorizing is trial and error.

The Difference of Two Squares

If you are asked to factorize an expression which is one square number minus another, you can factorize it immediately. This is because a² – b² = (a + b)(a – b) .

Grouping terms may allow using other methods for getting a factorization.

For example, to factor

Then a simple inspection shows the common factor x + 5, leading to the factorization